As the bells strike 10 o’clock on Maundy Thursday night, the city of Murcia is plunged into total darkness. There’s a roll of drums, the doors of the church of San Lorenzo burst open and men wearing purple cone-shaped hoods step into the narrow street.

Then the moment the crowd has been waiting for – Jesus nailed to the cross on an ornate gold paso (float) is carried aloft by 30 hooded men. Women’s voices rise and fall, expressing their devotion. A lone male voice pierces the darkness. A gypsy voice. A saeta. Full of pathos, full of duende (pain). When he reaches a crescendo the women take over, as if to soothe the crowd. The sorrow is too much to bear.

The sombre figures, in purple hoods with slits for eyes, continue their slow march through the cobbled streets. They clutch candles or lanterns and stumble under the burden of wooden crosses on their shoulders. A young boy swings a silver thurible and incense fills the air. The crowd, pressed into doorways and up against the walls, turns to greet the Madonna as she stretches out her arms to embrace the crowd. As the Virgin passes by, old women fall to their knees, making the sign of the cross.

Young and old senoras wearing black peinetas, the traditional high comb-headdresses,accompany the Madonna on her journey. They cradle glass globes in their gloved hands,candlelight throwing lace shadows. I take my place behind the women, swept along by the crowd and their unquestioning faith. I’m enthralled but lost, reliving a faith I rejected long ago.

At dawn on Good Friday, I follow a small group of purple-hooded figures to the church of San Agustin. Minutes later, the church doors open and 40 hooded men carry out the first of the floats by Francisco Salzillo, the 18th-century Murcian sculptor. It is these lifelike “rustic” tableaus that have brought me back to this region. On a previous visit I had seen the statues in the Museo Salzillo and became intrigued as to how such weighty structures could be carried through the streets.

Besides, by then I had fallen in love with this city, with its Baroque cathedral, Renaissance palaces, Gothic towers and open squares. It is true that other cities in Spain, such as Seville and Granada, are better known for their Semana Santa celebrations. Yet this tranquil city, south-west of Alicante, surrounded by mountains and visited by few tourists, is far less crowded.

People stare transfixed at the tableau being carried around the square. It shows 13 earnest, bearded men gorging themselves on pineapples and purple grapes at the Last Supper, a Bible story I remember from my youth.

The float bearers’ dress is less sinister this morning. Their faces are uncovered and their purple robes are hitched up to reveal white petticoats and white-lace stockings. They look pregnant, with overhanging bellies full of sweets, which they throw to squabbling children who catch them in midair.

All this to sweeten the scenes unfolding on the floats that follow: Judas’s kiss of betrayal; the Roman soldiers; the chaining and whipping of Christ. The narrower the streets, the fiercer the blows seem. Trumpets sound, drums roll and nuns lean over their balconies to touch their bleeding saviour. The crowd stands erect and silent as the crucifixion passes. The procession is over.

After so much sorrow I look forward to Easter Sunday and its message of hope and redemption. Some of the faces in the procession are by now familiar but the costumes are different. No longer the purple pointed hoods but twisted crowns of white and gold. The floats, too, have changed – no longer Christ on the cross but the Archangel Gabriel bringing good news, informing Mary Magdalene that Christ has risen from the dead. If only I believed it.

Two burly, jocular men at my side interrupt my reverie. “Forget all this religious stuff,” they say. “Tomorrow’s Spring Festival is much more fun. Look out for us on one of the floats.”

I smile at them, Anton and Carlos. Semana Santa, however moving and spectacular, has failed to lead me anywhere but back to my secular self.

The following day I make my way to a bridge over the river – the best viewing point for the procession – to join the waiting crowd. The women are wearing embroidered skirts and shawls, with flowers in their hair. The men have cocked felt hats, waistcoats and short trousers. Even babies, pushed along in their high-tech buggies, are dressed in traditional Murcian style. My jeans and T-shirt suddenly seem conspicuous.

Stallholders wheel their makeshift barrows on to the bridge. Balloons of purple horses, green whales and overweight butterflies hover over plastic tubes of sunflower seeds. Minnie Mouse peers out of the backside of a pink-striped zebra and there is a hot trade in small drums and silver swords.

The police move the stallholders away and children scatter to the sides as old men and young boys appear on bicycles, ringing their bells. These are no ordinary bicycles. They are mobile workshops for knife sharpening, shoe mending, milk delivery or for the country priest to tour his parish. And they’re followed by every possible size and shape of horse and cart, reminding the crowds of times past.

Then come the floats on decorated trucks. Young girls, dressed as old women with flour-covered hair, carry out traditional “women’s” tasks – washing, weaving and walloping their errant husbands. A young boy, pedalling a three-metre-high water wheel, shouts at his float driver as he crashes into overhanging branches. 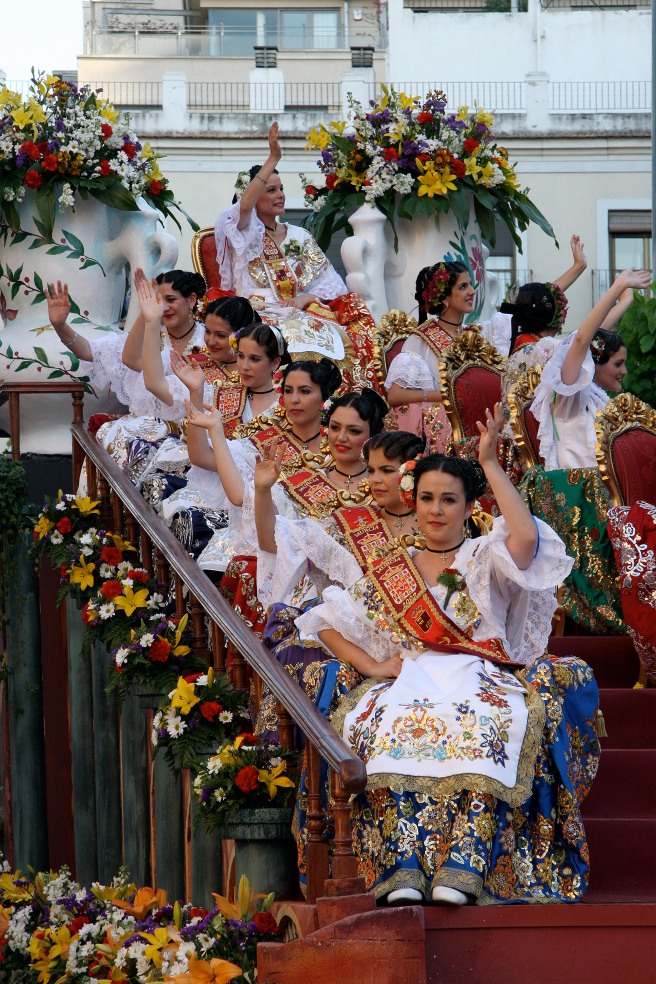 People gasp with admiration as a float passes by with 12 young reinas de la huerta (queens of the market garden) who wave like robots at the crowd. They sit rigid, multicoloured striped skirts covering their knees and embroidered shawls tossed over their shoulders. Posies of purple, red and yellow flowers are tucked into tight black curls plastered against their foreheads. Not a hair is out of place.

The girls’ smiles remain fixed, perhaps they’re fearful of upsetting their make-up. Then these demure creatures drop their guard and start to fumble for something under their skirts. Bedlam breaks out as they hurl handfuls of boiled sweets at the crowd.

A band of strolling musicians starts to play. Young girls arch their arms and click their castanets. They stomp and glare at their partners, boys on the edge of puberty. The pairs link arms, whirling and swirling down the narrow streets.

The crowd cheers, “Ole, Ole!” and suddenly I am part of the procession, surging over the river to an area I have never seen before; a poorer part of town.

Other trucks follow, restaurant owners, market traders, butchers, all throwing food to the crowd. A greengrocer lands a grapefruit on the forehead of a well-coiffured elderly woman who is sent reeling over the back of her chair. People hurl themselves at the trucks, arms outstretched, trying to catch whatever is being thrownoverboard by laughing country women. It seems it is worth risking life and limb for that inch of sausage or a morsel of bread; that can of beer or that handsome leek.

I learn to catch the market traders’ eyes and I’m pleased with my success. Then the crowd feigns anger as I manage to intercept an artichoke and, with relative good humour, I am pushed to the ground. I lie there stunned, looking up at unfamiliar buildings in an unrecognisable part of town. Another truck is coming towards me, slowly, but coming nevertheless.

“Get up! Get up!” cry Anton and Carlos, my new-found friends, waving from the float. “We’ve saved the best sausage for you!”