Skip to content
The coach climbs through thick forests towards Mont Tremblant. I glimpse stretches of water through the trees, surrounded by houses with gardens that go down to the water’s edge.

Perfect for a summer vacation – a barbecue of elk, a moonlit dip. 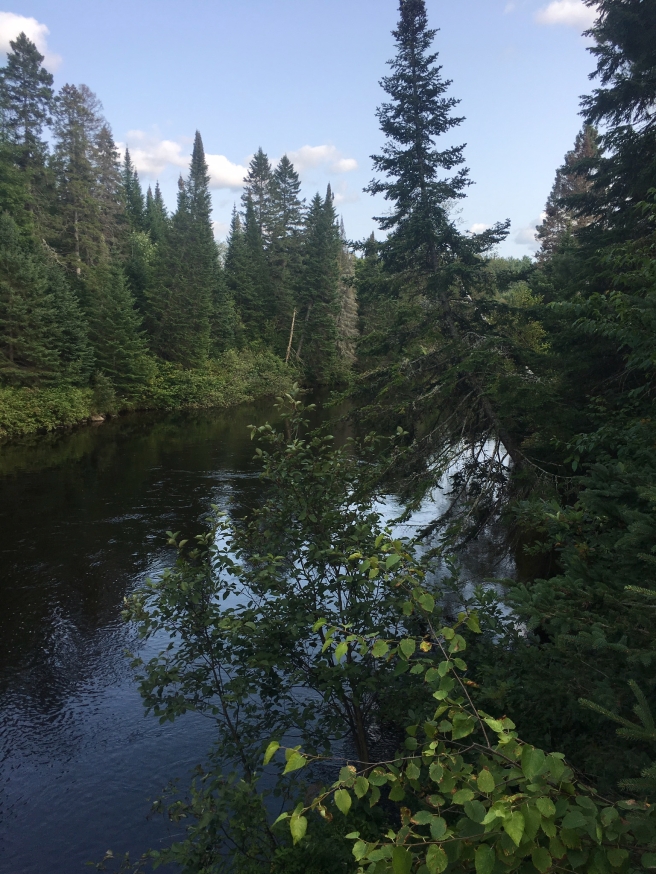 Ski slopes slice through the firs reminding  me how snow and ice will soon cover this land but not before yellow, red and auburn flames extinguish the summer and leave the branches bare. Except for the fir trees that will stand resolute, preparing for the snow.
I feel slightly nervous. A friend in Toronto, had asked me questions about my stay in the Laurentians north of Montreal. “It is a writing retreat, not a course,” I had insisted. “No I don’t know if there will be any other writers there. And no I don’t know whether I will cook my own food, eat with others, alone or indeed eat at all.” My friend’s face clouded over, anxious, perhaps, that I  knew so little. A minimal web and social media presence had given me few clues – no reviews from other writers, just photos of people posing against brightly coloured walls at the Val David literary festival.
“It seems awfully cheap,” said my friend.
Flavia, the Romanian Canadian poet published in four languages,  is there to meet me at the bus stop in Val David, an ex hippy, arty village. As we reach her house a man comes out to greet us.

“This is Per, from Copenhagen,” says Flavia. “He is a journalist.”
Per, the only other writer on retreat, lifts my case and takes it up one floor, breathing heavily. I try to insist, “No, please it has lots of books in it.” Flavia tells Per to leave the case mid way before he has a heart attack. Flavia introduces me to her two cats.
“Bully boy is a mixture of a cat and a lynx or some other forest animal. You can tell by his huge shoulders.” Bully Boy glares at me.  “He doesn’t like men,” Flavia adds as if to assure me I have some chance of developing a relationship with this wild animal but no guarantee. Flavia took in Bully Boy after he kept getting into fights in the forest and limping back to Flavia, injured.

She took in the other cat,  Incarnation, only after she had proved she was the incarnation of her beloved, previous cat, Felix.

Neither Incarnation nor Bully Boy is allowed out of the house for fear they will be eaten by wild animals in the forest.
We move to the terrace – pots filled with trailing chillies, geraniums and even a vine.
“ I asked the builders not to cut down any more trees than necessary,” says Flavia as we look out at the encroaching firs. “I don’t see the point of cutting down the forest to make lawns. You might as well live in the suburbs.” She sweeps her arm towards the neighbours’ despised, manicured gardens. “There are lots of wild animals in the forest- deer, lynx, marmots, bears,” she continues. “Bears?” I ask. “Only 6 deaths in the area since 1936.”  So precise, so informed.  Flavia instructs me in the rules of the house. “We eat every night at 6 pm. I do the cooking, you and Per do the washing up and we share the cost of the shopping. Fair?” “Very fair,” I reply.
I take up my belongings bit by bit, as instructed by my host, settle into my bright yellow room under the rafters and venture out onto the tiny terrace from where I can almost touch the surrounding forest.

At six pm I go down to supper.
“Fish soup,” says Flavia. “Per’s father was a fisherman in Denmark,” she adds as if to explain why this version of fish soup has a great big fish’s head staring up at me from the pot, swilling around amongst the vegetables.  I manoeuvre the ladle around the fish head, picking out the cauliflower and the carrots under the watchful eye of the fish and Bully Boy, who I now recognise as Behemoth, Bulgakov’s cat. As a city girl I am a little daunted by this onslaught of nature.
The next day we go shopping for food. Per wants to go to Walmart, to experience real America. Flavia takes us to unreal America – a supermarket with local fruit and vegetables, organic fare and the like. We walk into an enormous fridge, putting on clothes to keep out the cold, and choose our cheese. Goat’s cheese for me, blue cheese for Per. Flavia whoops with delight at the baskets of peaches at a dollar each. We go home with six boxes, sixty peaches. Peach jam, peach puree and peach pie sustain us through the week. 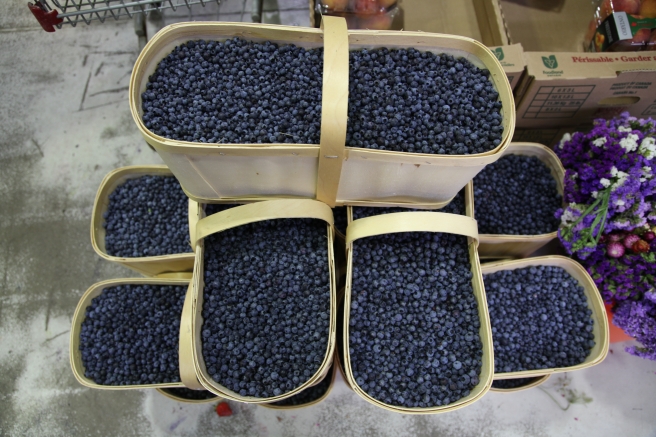 I write under the rafters as the rain pours down. I go for walks around the nearby Lake Cecile frustrated at the private houses that have commandeered its shores.

I walk into the village to see the rapids.

I have a coffee.

Wander back – I am already missing my house in the wild.
I help myself from the fridge at any time but look forward to our daily 6pm meal – home made cooking at its best with a definite Romanian bent. We are a homely threesome.
I admire Flavia’s ability to root out a bargain not only for food but for everything else. Nothing in the house seems to have cost more than 5 dollars – and her wardrobe, well! One day she came back with two knock-out outfits for less than 8 dollars each. “How do you do it?” I ask. “I arrived in this country with a young son and 150 dollars in my pocket escaping the Terror, “ she explained. “How old were you?” I ask. “Irrelevant,” she replies. “I aged overnight.”
Caught up in  admiring Flavia’s  latest haute couture purchase I leave the door open and Bully Boy bolts for freedom. I flee knowing I will be useless in recapturing the wild cat and return two hours later, nervously. It has taken Flavia an hour and a half to seize Bully Boy by the tail. Bully Boy tries to make friends with me, as if thankful for his one and a half hour of freedom and purring for more. “Imprisoned with love” says Flavia. Then Bully Boy limps around with something in his foot. “If you hear me scream as I deal with Bully Boy in the night come and rescue me.” “Why don’t you get a vet?” “They won’t treat wild cats in case they get hurt.”
I enjoy Flavia’s stories of the cats who have a second, third, fourth sense;  of the people she has known and often confronted in her life – the Chinese professor who came to stay and sat huddled in a huge coat, writing nothing and going nowhere, until she threw him out, drove him to the bus stop. He wrote to thank her profusely for his stay. About the candelabra that she misses in her flat in Buenos Aires where she spends the winter, gives poetry recitals and where her friend, the Romanian ambassador, dances tango every night. About her experience of growing up in Romania during the Soviet era and the devastating impact on her family. About being a refugee in Greece and choosing to settle in Canada rather than Australia or the US, a decision she does not regret. About her career in media, films and literature in Toronto and about her battle to get back her family’s property in Bucharest, given away during the Communist era.
The last evening we have dinner on the terrace with the woman mayor and a Cuban artist, the mayor’s friend. We converse in French, Spanish and English, fuelled by champagne, about politics, art and literature and cats of course. The food is delicious.
On my last day I get up early for a last walk around Lake Cecile. 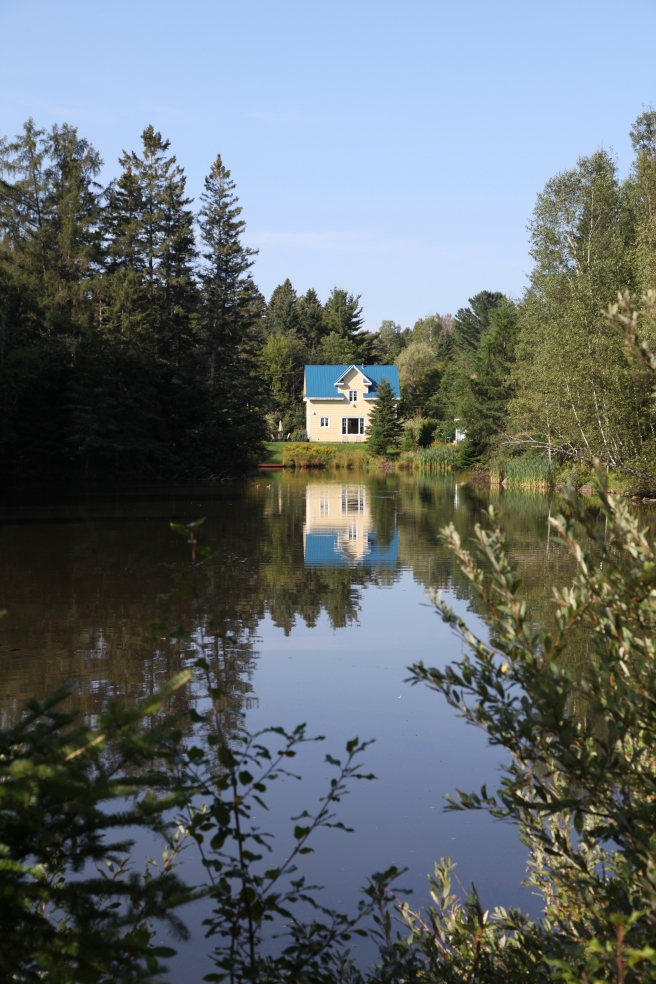 A heron flies across my path. I have not seen a lynx, a deer, a marmot or a bear but the heron’s grace more than makes up for this.
Flavia takes me to the bus stop. “It is too short a stay,” she complains.”Come back for the festival.” I might just do that.