The imam’s morning prayers wake me at half-past five and I tumble out of bed. An hour later, I’m in a wicker basket with a moody American teenager and a clutch of excitable Japanese women. Our pilot fires gas flames into the hot-air balloon and we rise into the crisp air.

We hover over the unique landscape of Cappadocia, formed by volcanic eruptions that have shaped the region’s famous fairy chimneys. Some of the colossal cones and spires look like huge mushrooms, topped by heads of hard lava projecting from thin towers of softer lava underneath. Others are joined together like huge organ pipes or stand alone in vineyards. 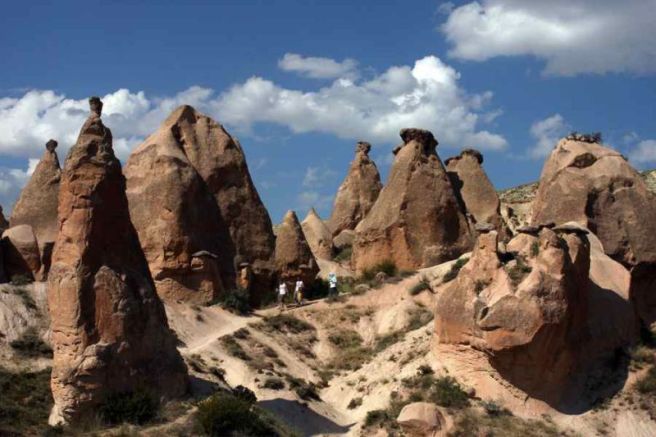 Our pilot guides the balloon towards the pink satin folds of the cascading cliffs of Rose Valley. We get so close we can see into the caves hollowed out of the soft rock but there’s no sign of life. The monks and hermits who lived here as far back as the 5th century have long gone.

As we rise above the other balloons this morning, we see one of the volcanoes in the distance to which we are in debt. Ericyes to the east and Hasan to the west have created a surreal habitat for a procession of civilisations: the Hittites, Persians, Greeks, Seljuks and those living under the Byzantine and Ottoman empires. It is only in the past few decades that people have been moved out of their cave dwellings and into newly built accommodation. In the way of fashion, the caves have since become highly desirable and ripe for conversion into boutique hotels and apartments. 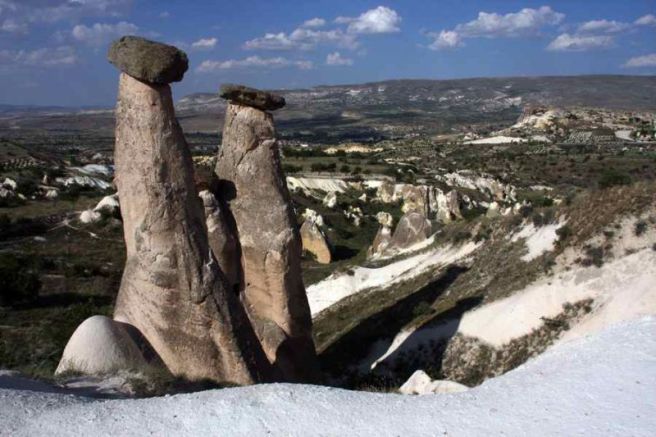 Our pilot, Francisco, has flown over the Grand Canyon, the Eiffel Tower and the Great Wall of China but Cappadocia is his favourite setting. ”Here, it is three-dimensional,” he says. It is true. Cappadocia is a spectacular, natural sculpture park.

”Look over there,” the teenager shouts. ”Those two overlapping rings of stone.”

The excitable Japanese women move aside so I can get a better view of the rings laid flat against the slope of a distant mountain. It’s the work of an Australian sculptor, Andrew Rogers, and his ambition is breathtaking. I wonder how a contemporary artist can hope to compete with geological forces of nature that have sculpted this landscape for millions of years.

During the next few days, I explore the valleys and fairy chimneys I have seen from the air. I visit the Goreme Open Air Museum, with a Byzantine monastery, convent and chapels built into the rock. Christianity flourished in Cappadocia in the Byzantine era and there are still 400 chapels and churches in the area built into the rock.

In Pasha’s Vineyard, I climb up the steep ladders to the fairy chimney where Saint Simeon lived in the 5th century. I follow the river along the Ihlara Valley, eating fresh trout cooked in guvec (an earthenware pot) in an open-air restaurant amid fir trees, hollyhocks and sunflowers, or ”moonflowers”, as the Turkish call them. At sunset, I watch pigeons swoop into their honeycombed dwellings carved into Pigeon Valley, deafened by their chorus. Their fertiliser is used on vines that produce excellent red and white wine and raki; pigeon droppings were also used in the plaster used for cave frescoes.

A highlight is Derinkuyu, an eight-storey underground city. ”Follow me closely,” the guide says. ”People have been lost down here for days.”

Indeed, it would be impossible to find one’s way out of this three-dimensional maze, one of more than 30 such cities in the region. I stoop, clinging to the rough walls as the ground falls from under my feet. There is an 85-metre air shaft that penetrates the eight floors; holes to shout out to people above and below; kitchens with clay ovens and a place to make wine. Two floors down is a horse stable; five floors down is a chapel chiselled in the shape of a cross and an adjoining meeting room with Roman arches.

”We have too many children anyway,” he replies, laughing.

Evenings in the courtyard of Kirkit Pension, a pleasant ensemble of restored Anatolian houses built into the rock, are full of fun but also informative. I learn about the Hittites, Turkish literature and different views about the origins of the underground cities. The pension is owned by Ahmet Diler and his Australian wife, Tovi, who met in 1982 in Cappadocia. At that time, the traditional houses in the village of Avanos were being destroyed by the local council for real estate speculation. Ahmet and Tovi organised petitions and more than 100 houses were saved and classified as national monuments. One night we’re entertained by gypsy musicians. ”My grandfather taught me music,” says Tayfun, plucking the strings of his kanun laid on his lap. ”He played a clarinet in my ear as a baby.”

We sit back and listen to The Tulip Song, about a pasha from Cappadocia who married the sultan’s daughter and became a vizier. And then Murat, who has prepared a meal of lentil soup, aubergine with meat, and watermelon, takes off his white coat, puts on a fez and dances, full of pride and confidence.

”He is the only dancing cook in Cappadocia,” says Osman Diler, our host, and we raise our raki glasses to the gypsies and the cook.

The tempo quickens. ”The song means ‘I am burning’,” Diler says and we all join the dancing cook until the whole terrace is trembling. Mercan, the half-Persian, half-Turkish cat, walks away in disgust.

Diler is adamant that tomorrow we will visit the Time and Space sculptures by Rogers, one of which we had seen from the balloon.

I nod half-heartedly. I still cannot see how 10 art installations, started in 2007 and scattered over an area of seven square kilometres, can enhance the natural beauty of the area. But Diler hasn’t seen this final work and missed the recent opening ceremony of the sculpture park.

We drive up dirt mountain tracks in search of Time and Space but then the unexpected happens. The sky opens.

”It never rains in June,” Diler remarks, handing me weatherproof clothes. We reach the summit and stand within a circle of rectangular basalt pillars. Then the sun breaks through and lights up a central obelisk capped with gold. If I didn’t know these stones were assembled in the past three years, I would imagine it was an ancient place for prayer or sacrifice to the gods, or a stage for a Greek tragedy.

From the summit we can see piles of stones scattered in every direction across the barren landscape; some are upright; others bear huge motifs of mythological beasts and ancient symbols of the area. The first to be installed was a horse, inspired by the name of Cappadocia, which means ”land of beautiful horses”. Others are more abstract and are meant to convey a link between the present and the past. They are part of a chain of 40 massive stone sculptures created by Rogers in 12 countries and across five continents. ”That is the latest one,” Diler says, leading the way down to what look like dry stone walls. It is only when we view the sculpture from a nearby hill that the shape becomes apparent. It could be a whirling dervish or a pregnant woman, her arms upraised, or a sensual evocation of the rhythm of life.

”Five hundred people from Goreme [the closest town] were employed for two months to assemble these stones,” Diler says.

”What do they think of them?” I ask, expecting local opposition.

”Oh, they like them,” he says. ”They think the artist is talking to people on other planets.” I start to laugh but Diler interjects: ”It is not hard to imagine such things if you live in this landscape.”

I’m not sure if this is a gentle rebuke for my scepticism or an invitation to dream of the improbable. I take it as the latter. This is the kind of landscape where you can imagine fairies nestling in chimneys, troglodytes living in the underground cities and beings arriving from the moon.

This article first appeared in the Sydney Herald on Sep 18 2010. http://www.traveller.com.au/chiselled-good-looks-15fqv